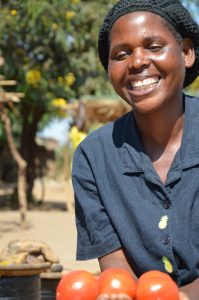 The 46-year-old widow bears no trace of the desperation she once lived in. Hers is a life of service and sacrifice. Since the death of her brother and his wife, Lebena took on the responsibility of caring for her three nephews.

Times were tough. She had no means of providing for her orphaned dependents. Lebena felt trapped. She began selling her body as a means of survival.

Everything changed in 2012 when Lebena joined WOW’s local Widow’s Group.

She found meaningful connection in fellowship with other women. This was also the place where Lebena learned about the love of Jesus. “It transformed my life completely,” she says. “Now I am a born again Christian.” Based on a biblical foundation, the widow’s group also recognized the importance of meeting its members’ physical needs. Many, like Lebena, were struggling.

Unlike most microloans, those offered through this project would not accumulate interest. Instead, there were unique conditions attached. Recipients of such funds were required to adopt a “gogo” (the colloquial term for grandmother or elderly woman). Any widow taking out a loan was expected to provide her adopted granny with items such as soap, salt and maize flour to support basic needs. In 2013, Lebena joined the group’s Gogo Loan project.

She did not adopt one grandmother. 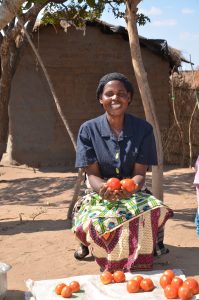 With the loan Lebena received, equivalent to about CAD $25, she was able to invest in her tomato business. The increased profits allowed the widow to provide for the nephews in her care as well as her two adopted grandmothers.

Before long, Lebena was able to take on another loan, greatly expanding her business. She now has goats and sheep, purchased through profits of her tomato sales. Not only does Lebena’s family have food security, with the addition of one more elderly woman, there are now three gogos in her care.

Lebena may not be what comes to mind when you think of a humanitarian. By North American standards she is still poor. She is not travelling around the globe to help those in a far off place or making speeches at the United Nations. On World Humanitarian Day, we want to recognize an unlikely hero.

Out of the little Lebena has, she gives.

As Jesus looked up, he saw the rich putting their gifts into the temple treasury. He also saw a poor widow put in two very small copper coins. “Truly I tell you,” he said, “this poor widow has put in more than all the others. All these people gave their gifts out of their wealth; but she out of her poverty put in all she had to live on.” ~ Luke 21:1-4