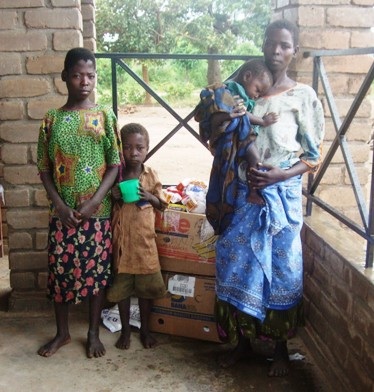 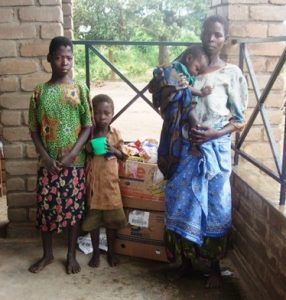 Nasinthika is a 31 year old widow living in Mngwangwa, Kalimbira 2 village.In 1996, at the age of 17 she married Mandala. Together they had four children, three girls and one boy. The family struggled but made ends meet. Mandala farmed a piece of land and was able to provide for his family as best he could.In 2006 Mandala fell sick. Both he and Nasinthika were tested for HIV but only Mandala was found to be positive. He was placed on ARV medication and given instruction as to its dosage and use. He was also advised to use condoms with his wife. Mandala refused the latter advice. Soon Nasinthika was pregnant with their fourth child, Aliveta. Just before Nasinthika was about to deliver, Mandala fell sick with malaria.On the day she delivered the baby, just a few minutes afterwards, she was told the tragic news that her husband had just died. Three days after, her in-laws chased her out of her home and their village demanding that she return to her own home village as this was her husband’s and he was no longer alive. She could take nothing with her. All she had was four children (one barely born) and the clothes on their backs.

Nasinthika was too weak to even walk, let alone carry her new born baby. A lady coming from a different direction, walking on the same road, found her passed out on the side of the road with her children around her. Her oldest daughter was only ten years old at the time. She found the children terrified and crying. The lady (whose name Nasinthika does not know to this day) revived her by pouring some water on her face. Even though she gained consciousness she was still unable to speak. The children were asked where they were going and Sofilett, the oldest child, was able to tell her. She then put Nasinthika on her back and Sofilet carried the baby and they began the journey back to Mngwangwa. The journey took over two hours.

Once in their home village she left the family in the hands of some of their relatives. Nasinthika had lost her parents when she was a little girl and so she moved in with her mother’s brother and his wife. Her uncle, after seeing the condition she was in, took her to the hospital immediately. There she was tested again for HIV. This time she was found positive. The doctor placed her on ARVs at once. She was also advised to come back after six months that little Aliveta should be tested as well. This she did and it was found that Aliveta was also positive. Now both mother and daughter are on ARV treatment.

Nasinthika’s life has gone from bad to worse. Her uncle is unable to care for five additional people along with his wife and six children. None of Nasinthika’s children are in school for failure to buy uniforms and school supplies. She is unable to find work because of her medical condition and she cannot leave little Aliveta nor her other younger children. Her second born daughter, ten year old Chiipila, has begun working as a nanny to help her family. She earns US$2.62 (MK390.00) a month which means the family has to survive on 8 cents a day. This is not enough to even feed one person let alone a family of five.

Nasinthika has begun to join the widows that meet in Mngwangwa each week. She said she joined the group so she can hear the word of God. “I am going through such a difficult time but I know God hears and sees. God will answer me one day and I have such hope, such eager expectation that my life will change because of Jesus, because I believe in Him.”

Listening to her and seeing her is a shock to the system. She stands there, having never used a bar of soap to wash or to bath with. “Looking at me you might think that I do not bath, or wash my clothes, but I do. This that I am wearing is the only clothes I own. My daughter got this for me. ”Nasinthika’s life and state is one that causes pause to life and all that we think. Her faith defies her condition and challenges ours. But after all is said and done, we must, like her, believe that things will change, just as her name translates…I was changed…a prophetic declaration!