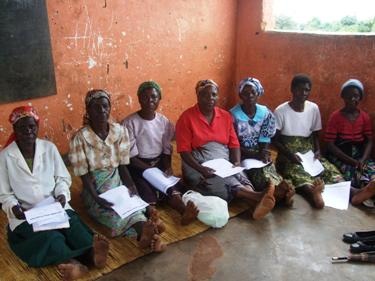 The success of the Mgona WOW program has been growing in the past several months. Evidence of this is found in the extraordinary tale of eight women who come from as far as the Salima road at Mchoka village near Malikha School (20 km away) to be a part of WOW Mgona and the ladies that make up the group.Sabita, Mainesi, Chrissie, Everesi, Mrs. Gwazani, Mrs. Muwanga and Mrs. Kadammanja all came to know the Ministry of Somebody Cares through the eighth member of this amazing group, Rekina.

Rekina is 65 year old widow who comes from Mchoka village.Her husband died in a road accident in 2003 and left Rekina with one child, Zelida. Zelida was married with three children but in 2006 she died as a result of HIV and AIDS leaving the three children with her husband. After three months Zelida’s husband disappeared from the village and until now, has never been seen by any one. Nikodemo (18 years), Samuel (16 years and in the first year of high school) and Kingsley 12 years (Std 5) were now the sole responsibility of their grandmother, Rekina.

In January 2008, Rekina was very sick and because she had no person to take care of her, her sister who stays in Area 50 (next to Mgona) took her in to look after her.One day when she was coming from the hospital she saw some Malawians and “Azungu’s” (foreigners) dancing at the Somebody Cares shed in Mgona.Rekina was very interested with the songs that these people were singing because they were Christian praise songs and one of the ones that caught her attention was “Mwandichiza ine Yesu, Ndikayang’ana komwe ndachoka, mwandichiza” You have healed me Jesus. When I look to see from where I came, I know that you have healed me.

She remembered her situation in the village where no one took care of her when she was sick but only God.Rekina called one of the widows, Christina, and asked her what was happening there.Christina, a member of WOW in Mgona, told Rekina the whole story of the Ministry of WOW and Somebody Cares in their area and how they have helped the community see the light. Retina being a widow was interested to join the group.

After getting well, she went back to her home and spread the good news about Somebody Cares and the WOW program to other widows in her village.Seven other widows agreed to join her on the journey out to Mgona (many were not able to because of the distance). The eight who are able to walk to Mgona have now joined the WOW group. They manage to come every Tuesday and Thursday and are passionately committed to being a part of the bible studies and the income generating activities that the widows learn. The walk takes the ladies three hours each way and so they are walking a total of about 6 hours to be a part of WOW in Mgona. Sometimes when activities take longer the eight ladies are accommodated by their new friends in Mgona. The tale of these women is extraordinary indeed as the oldest lady in this group is 65 and the youngest is 52…and they walk 12 hours each week to belong, to grow, to learn and to be inspired as well as to INSPIRE.

Thank you to all the donors who have helped the widows in this community gain such hope and healing that others are noticing and making amazing sacrifices to join them. To God be the glory.