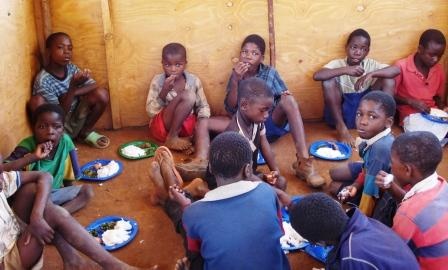 Kawale has reached their goal of feeding 100 orphans and vulnerable children, 1 hot meal a day, 5 days a week. In addition to this the children also receive fortified porridge each morning. A WOW team was able to visit Kawale in August of this year and can testify as to how tasty both the porridge and the hot meals are. It truly was a blessing to see these children looking much healthier than many of the other children that we had seen in our travels. We now know that they will have an advantage in their studies simply because they have food to sustain them each day.

The Kawale group welcomed our team with open arms and invited us to join them in their everyday work. They had us hoeing fields, washing dishes, pounding maize, taking attendance for the register, gathering wood, chopping vegetables, and cooking porridge over an open fire. We even played some net ball with the volunteers. What a privilege it was to spend time talking and sharing with the widows and volunteers who work with the children each day. We rejoiced in what the Lord has done in Kawale just in the last year. We visited their gardens where they are growing maize and have harvested enough maize to feed the children for a year. We witnessed the building of their new feeding shelter and office which will provide safe storage for the large rocket stove purchased by WOW donors earlier this year.

Even though our schedule was jammed packed with bibles studies, health care teaching and home based care ministry there was also time for interviews with several of the secondary students that WOW supports as well as the widows involved in the income generating program. I’ve included one of their stories below:

Alex is an extremely bright student. He is 13 years old and is already in Form 1, the equivalent to Grade 9 in Canada. He has remained at the top of his class despite his difficult circumstances. His father passed away when he was just 4 years old and his mother passed away when he was 9. Alex and his 3 sisters and 1 brother moved in with his grandparents which is a common occurrence now in Africa. Unfortunately his grandparent’s small home in nowhere near adequate to house such a large family. Alex and his brother sleep together on a mat on the floor and use their grandmother’s skirt to cover them at night, even when the temperature dips down to 8 degrees Celsius some nights. Alex told WOW that sometimes he eats and sometimes he does not. Both his grandparents have been forced to find whatever work is available just to find food. His grandfather cuts grass and his grandmother draws water together making a few Kwatcha each day. It was impossible for this family to keep the children in school since you must pay fees to enter secondary school – assuming you can pass the test to enroll. Alex aced his exams and praise God, WOW donors are helping Alex and others like him to continue his education by covering school fees and providing uniforms, school supplies and a mosquito net. He also comes to Kawale Orphan Care to receive a hot meal each day. Alex wished to express his gratitude to WOW donors and to let them know that he is working hard both at school and at home. Thank you so much for giving Alex and many others like him hope for a future.